Rustic Peach Tart recipe is the simplest of desserts. All of the ingredients that are stocked in our pantry with the one addition of fresh peaches. Serve peaches freshly picked firm and juicy. Be aware that the peach juice is ready and willing to drip down as you reach in for a bite.

Of course, I love peaches in almost any way that you may serve.  Somehow, the full flavor of Summer soaks into the peach and drizzles out when bitten into or sliced. Peaches also make the best tasting jelly or jam. Fresh peaches have an amazing flavor that does not come through when eating canned peaches.

Rustic peach tart recipe is a delicious dish to make ahead and serve later. A dollop of fresh homemade whipped cream served on succulent juicy peaches sitting on a bed of crunch and crust.  Serve this recipe to grab a bite of summer while you may.

Use homemade crust or store bought  for the Rustic Peach Tart?

I elected to use a homemade crust with this dish. The rustic tart screamed out for the addition of homemade crust. There certainly is an old-fashioned element to making your own. The stand-mixer  makes easy work of preparing the dough. I love my granite on the counter and it makes an easy work surface to roll out dough.

Grill Man’s Aunt Theria provided the Standard Pie Crust from her little Recipe Box Treasures notebook. I  adapted the recipe to include the stand mixer and my method for preparing the dough. The stand mixer makes for easy work of a pie crust.

Although, I may use the store-bought version when shortage of time calls for it. Please use which ever version allows you to make this Rustic Peach Tart recipe either homemade or store-bought. I recommend making the tart, allowing to cool, refrigerate least 4-6 hours and serving as desired. This dish tastes good hot out of the oven but it is sumptuous served cold.

Alexa, shout out to all the  songs for Georgia Peaches,  Lauren Alaina’s  and Lynyrd Skynyrd’s. 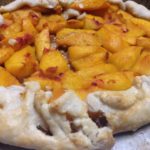 I have a love affair with food, entertaining, travel and music. www.diningwithmimi.com is a vehicle for me to share my journey of food, travel and music. Traveling allows exposure to all types of foods and flavors. I have learned to cook by being hungry, curious and willing to fail. Food is another form of art and creative expression. Join me on my journey. Copyright 2016-2019 by Mimi View all posts by Mimi

Please let me know thoughts about the site. Cancel reply

This site uses Akismet to reduce spam. Learn how your comment data is processed.

Privacy Statement located in Menu under Reality Page. © Copyright Dining With Mimi , 2016-2020 Unauthorized use and/or duplication of this material without express and written permission from this site’s author and/or owner is strictly prohibited. Excerpts and links may be used, provided that full and clear credit is given to Mimi Woodham Dining With Mimi with appropriate and specific direction to the original content. Copyright 2016-2020

Hello, Thank you for visiting. Please subscribe below to get the latest updates.

Thanks for stopping by the site. Visit the Q and A Page!

What kind of recipes would you like to see on the site? Leave a suggestion for me to add in the upcoming months.

Do you have questions related to entertaining or cooking? Look for the Q and A page and fire away.

Post the question and I will answer within 24-48 hours depending on the complexity.

Disclaimer: I will answer based on my experience and research materials available to me.

© Copyright Dining With Mimi , 2020-2016 Unauthorized use and/or duplication of this material without express and written permission from this site’s author and/or owner is strictly prohibited. Excerpts and links may be used, provided that full and clear credit is given to Mimi Woodham Dining With Mimi with appropriate and specific direction to the original content. Copyright 2016-2020